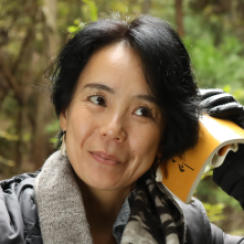 KAWASE Naomi (1969, Japan) was educated in directing at the Visual Arts College in Osaka. Her first feature, Suzaku, was selected for the Tiger Awards Competition in 1997 in Rotterdam and was awarded the FIPRESCI prize. Kawase's film The Mourning Forest (2007) was awarded the Grand Prix at Cannes and was nominated for the Palme d'Or, as were the films Hanezu (2011) and Still the Water (2013). In April 2016, she was named as president of the Cinéfondation selection and the Short Film Jury of the 2016 Cannes film festival. Her film Sweet Bean (2015) opened the Un Certain Regard section in Cannes, and Radiance (2017) also had its world premiere in this programme. Family is a recurring theme in her work.