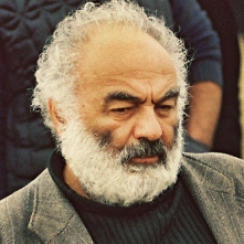 Sergei PARAJANOV (1924, Georgia – 1990, Armenia) studied film at the VGIK in Moscow. He made his first film in 1954 (Andriesh). Sayat Nova/The Colour of Pomegranates (1968) is considered his masterpiece. In 1987 his film The Legend of Suram Fortress received the IFFR Rotterdam Award for the Most Innovative Film. Parajanov paid a heavy price for his outspoken criticism of Soviet cinema and the authorities: Soviet movie studios rejected all his projects after The Colour of Pomegranates, and he was sentenced to 5 years in a Ukrainian prison in 1974. A wave of international protests by the likes of Truffaut, Buñuel, Pasolini and Antonioni followed. Parajanov’s art works – assemblages, collages, drawings – were mostly created during his imprisonment. The last feature Parajanov completed was Ashik Kerib (1988), selected by Venice and New York, which won the European Film Academy Award (European Director).

Watch The Color of Pomegranates on IFFR Unleashed