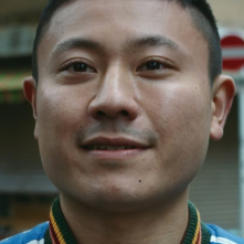 NINOMIYA Ryutaro (b. 1986, Japan) studied Film Production for a year, after which he decided to follow an acting course. He made his first feature film The Charm of Others in 2012. The film won the runner-up at the largest indie film festival in Japan, Pia Film Festival. It was shown at many film festivals around the world including Vancouver International Film Festival and IFFR. He then acted in two films before making his second feature film Sweating the Small Stuff (2017), in which he plays the main lead.