Thanks to the entrepreneurs and businesses who support the festival, we can do what we do best: support international film talent throughout the year, put the latest film projects in the spotlight in Rotterdam, and invest in film education in primary and secondary schools in and around the city.

Strengthen each other and the city’s profile

What started as 'Film International' in January 1972, with famously just 31 films and seventeen visitors on the opening night, has since grown into one of the largest cultural events in the Netherlands and one of the largest film festivals in the world for the public and film industry. International Film Festival Rotterdam (IFFR) provides a platform for emerging film talent and brings their new, unique work, together in an extensive program, to as large and diverse an audience as possible. The filmmakers and the audience find each other during events like Talks & Masterclasses, and even after the film has ended, the audience can join the conversation with the makers after the film. The effect of this fusion is reflected in this video by director André Turpin, who talks about his first festival experience while enjoying the Rotterdam skyline.

IFFR and Rotterdam are inseparable. The festival belongs to all of us and we welcome everyone to join in. By joining the Tiger Business Lounge, you get an actual look behind the scenes. Would you like to sign up or learn more? Let us know via [email protected]

"The film festival is a place to celebrate friendships and deepen business contacts." 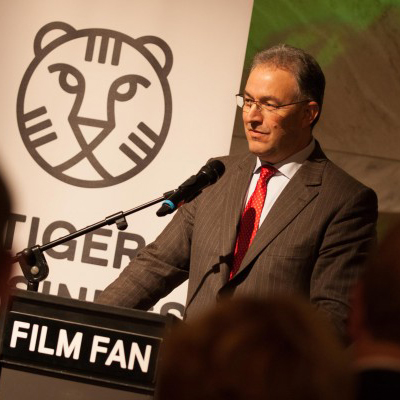