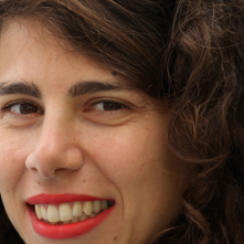 Maria Giovanna CICCIARI (1983, Italy) studied at both the university of Milan and the Brera Academy. She makes shorts, among them several award-winning films, such as In nessun luogo resta, for which she received the Special Jury Prize during the Torino Film Festival 2012. Since 2013 she has been collaborating on an experimental project on dance and cinema, together with choreographer Annamaria Ajmone. In 2016 her film Atlante 1783 premiered at the Venice International Film Festival.