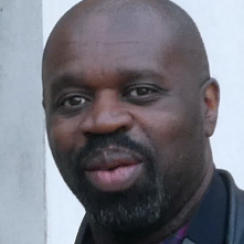 Keith PIPER (1960, Malta) is a prominent British artist and academic, a founding member of the all-black BLK Art Group, and the creator of the multi-media installation Robot Bodies (1998) exhibited at IFFR. Having grown up in and around Birmingham, his interest in art was first sparked by the aesthetics of the decaying industrial landscape of his youth. He attended Trent Polytechnic University in Nottingham, where he graduated with a Bachelor's in Fine Arts, followed by a Master's Degree in Environmental Media from the Royal College of Art in London. Though he originally utilized paint and canvas media in his artworks, he progressed towards the use of video, computer software and other technologically inventive materials from the late 1980s on. He was awarded an honorary Doctorate of Arts by the University of Wolverhampton in 2002.