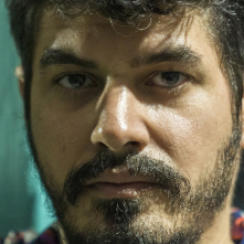 Guto PARENTE (1983, Brazil) is an independent filmmaker, educated in Film at Escola Pública do Audiovisual de Fortaleza. He was a member of Alumbramento, an artists' collective and production company in Ceará, Brazil, until 2016 and is now part of Tardo Filmes in Fortaleza. Parente made several short films, amongst which Dogs are Said to See Things (2013) and The Mysterious Death of Pérola (2014). In het past he has regularly directed films in collaboration with Pedro Diógenes, Luiz Pretti and Ricardo Pretti, films that are mainly situated in Brazil. Parente's Inferninho (2018), a co-direction with Pedro Diógenes, and the independently made The Cannibal Club (2018), are both world premieres in Rotterdam.