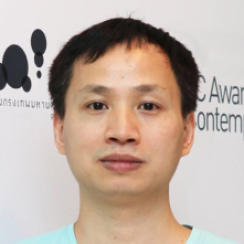 ZHOU Tao (1976) is a Chinese video artist and filmmaker. He studied oil painting and mixed media at the Guangzhou Academy of Fine Arts, but works mostly in the fields of performance and video. At first glance, his work seems to convey a documentary feeling, but at a closer look, the viewer finds that much of the action is staged; Zhou often incorporates performance elements into his videos and installations, and through this creates an unusual visual language. Besides performativity, public spaces and cities are an important element in his work, for instance Guangzhou, where Zhou studied and is still based, but also Paris, New York, Barcelona and Bangkok, where he participated in residencies. His works After Reality (2013) and Blue and Red (2014) have been shown internationally, and in addition to several group shows, he has had solo exhibitions in Cambridge, Guangzhou, Hiroshima, Paris and Barcelona. In 2015-2016, his work was on display at Museum Boijmans Van Beuningen in Rotterdam and in 2016 he made Land of the Throat, on commission for the Solomon R. Guggenheim Museum in New York. In 2015 he also received the first HNF/BACC Award for Contemporary Asian Art, awarded by the Han Nefkens Foundation in Bangkok. His film The Worldly Cave, nominated for the Ammodo Tiger Short Competition, will have its European and festival premiere at IFFR 2018, accompanied by a retrospective of his video works, which will now be shown in a cinema setting.