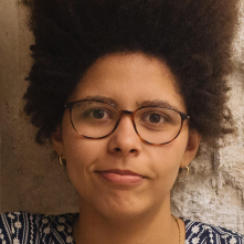 Young filmmaker Yasmin THAYNÁ (1993, Brazil) is the founder of AFROFLIX, a digital platform for films with at least one black person in a main production role. She also curates for FLUPP festival, a literary festival focusing on peripheral communities, and is an audiovisual researcher at the Institute for Technology and Society in Rio de Janeiro. KBELA (2015), an experimental short film about black girls and their relationship to their natural hair, was her first venture into film. Since then, she has gone on to direct a documentary, a webseries and another short film.