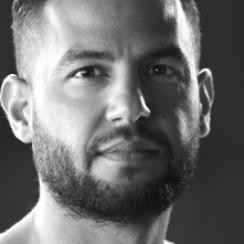 Ulaa SALIM (1987, Denmark) studied at the National Film School of Denmark. He uses his personal experience as his inspiration. Together with his partner and producer Daniel Mühlendorph, he created the production company Hyanene Film. Salim's short film debut Our Fathers' Sons (2015) was also shown at IFFR. His first feature, Sons of Denmark (2019), had its world premiere in Rotterdam.