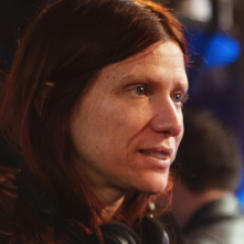 Susanna NICCHIARELLI (1975, Italy) completed her studies Philosophy, and was educated in Directing at the National Film School in Rome. As a filmmaker she worked with Nanni Moretti and then wrote and directed several short films, documentaries and feature films. Cosmonauta (2009) won many prizes, among which one in Venice. Nico, 1988 (2017) received the Venice Horizons Award for Best Film and is included in the 2018 IFFR Live programme.