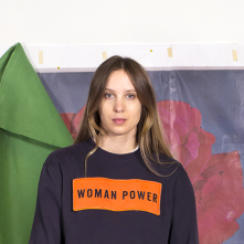 Sara CWYNAR (1985, Canada) is a designer, artist and filmmaker who lives and works in Brooklyn. She studied English Literature and Design and graduated with a MFA from Yale University in 2016. Her practice is situated between old and new, analogue and digital, nostalgia and futurism. Cwynar has held solo and group exhibitions in museums and galleries around the world. Her first films, Soft Film (2016) and Rose Gold (2017), both screened at IFFR 2018, where the latter was rewarded with a Tiger Short Award. In 2019 she returns to Rotterdam with the European premiere of Red Film (2018).