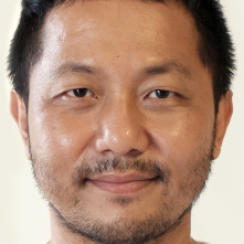 Phuttiphong AROONPHENG (1976, Thailand) graduated in Fine Arts from Silpakorn University and then studied at the Digital Film Academy of New York. Phuttiphong’s short films have been shown both at international film festivals and art exhibitions. Ferris Wheel (2015) screened at over 20 festivals and received 10 awards. He participated in the 2009 Asian Film Academy at Busan. Manta Ray (2018) is his feature debut.