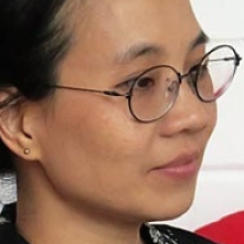 Curiosity is what drives the work of NGUYEN Trinh Thi (1973, Vietnam). Her films and media art investigate the role of memory in complex cultural histories and the position of artists in Vietnamese society. She is based in Hanoi now after completing studies in journalism, photography, international relations and ethnographic film in the USA. In 2009, she founded the Hanoi DOCLAB, a centre for the local community of independent filmmakers and artists. Nguyen’s films and installations have been shown at many festivals and exhibitions including Biennale de Lyon, Asian Art Biennial, Oberhausen International Film Festival and IFFR, where her essay film Letters from Panduranga (2015) competed for a Tiger Award for Short Films.