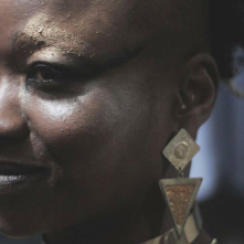 Musa Michelle MATTIUZZI a performer, writer and researcher. She holds a degree in performance art from the Pontifical Catholic University of São Paulo. She participated in the 32nd São Paulo Biennial where she published the text merci beaucoup, blanco! - performance photography experiment. In 2017, she participated in the Capacete Residency Program in Athens. In the same year, her film Experiencing the Flooding Red won Best Short Film in the X Janela Internacional de Cinema de Recife. In 2018, she participated in the 33rd Biennial of São Paulo, in the afro-affective affinities project. In many of her performances she discusses the multitude of meanings that colors can take on when placed on her body.