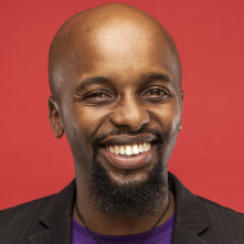 Mugambi NTHIGA started his career as an actor in the Nairobi theatre scene, where he worked on several stage plays and musicals. Besides acting, Nthiga has also pursued a career in writing and he is part of an improve comedy collective. He co-wrote Kati Kati (2016), which premiered at the Toronto International Film Festival 2016 where it was awarded with the FIPRESCI Prize. He was also co-writer of Supa Modo (2018), a film that premiered at Berlinale 2018, and went on to win over 50 prizes worldwide.