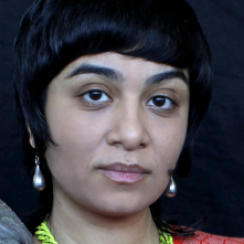 Kuwaiti visual artist Monira AL QADIRI (1983, Senegal) received a PhD in inter-media art from Tokyo University of the Arts. Her research was focused on the aesthetics of sadness in the Middle East stemming from poetry, music, art and religious practices. Her work explores unconventional gender identities and the legacies of corruption. She is a founding member of the artist collective GCC. In 2016 Al Qadiri was accepted for an artist residency programme at the Rijksakademie in Amsterdam.