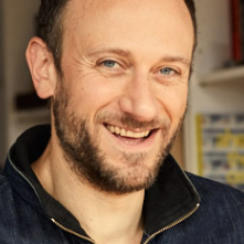 Michael PORTNOY (1971, USA) is a multimedia artist who calls himself a "Director of Behaviour". He studied English Literature and Creative Writing at Vassar College. His work often incorporates his background in dance and comedy, as well as the concept of Relational Stalinism. In 1998, he famously interrupted Bob Dylan's performance at the Grammy Awards. His work has been exhibited and performed in museums around the world.