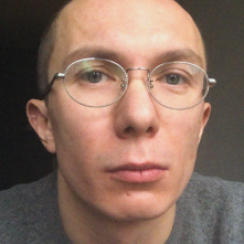 Maxim TOMASH (Russia) was born in Saint Petersburg and currently resides in Moscow, working as a filmmaker and cinematographer. After his career as a professional skier ended because of a car accident, Tomash started filming extreme sports. Over time, he became less preoccupied with filming tricks and stunts and more interested in the daily lives of the athletes. In Heel-and-Toe, his first feature documentary, Tomash follows musician Antokha MC as he tours through Russia.