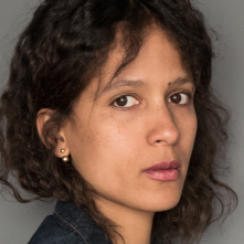 Mati DIOP (1982, France) lives and works in Paris and is both filmmaker and actor. She directed her first four short films while attending Le Fresnoy and Le Pavillon (Palais de Tokyo). She is the niece of the great Senegalese film director Djibril Diop Mambéty, and made Mille soleils (2013) as a homage to his Touki bouki. In Rotterdam, Diop has won a Tiger Award for Short Films twice: in 2010 for Atlantiques and in 2012 for Big in Vietnam. In 2014, the filmmaker was in Rotterdam as a jury member for the short films competition. Her latest feature, Atlantique (2019), won the Grand Prix at the 2019 edition of the Cannes Festival. She is the first black female director to participate in the Cannes Competition.