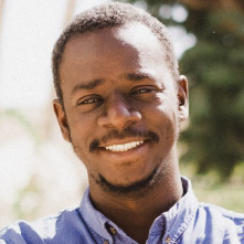 Mamadou DIA is a Senegalese director and director of photography based in New York, where he completed his MFA at Tisch School of the Arts in 2017. His stories are rooted in daily realities, inspired by his life in Senegal and his travels. His short Samedi cinema (2016) premiered at the Venice International Film Festival and the Toronto International Film Festival. With Nafi's Father, he won the Golden Leopard in the Filmmakers of the Present competition and the First Feature award at Locarno.