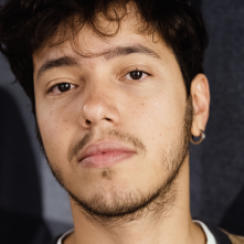 Leonardo MOURAMATEUS (1991, Brazil) is a screenwriter and director of multiple award-winning short films, including Mauro em Caiena (2013) and A festa e os cães (2015). Both titles won Best Short Film at the Cinéma du Réel film festival. His work is exhibited in museums such as Centre Pompidou in Paris and the Museum of Art in São Paulo. Mouramateus graduated in Cinema and Audiovisuals from the Federal University of Ceará, has an MFA in Art and Multimedia from the University of Lisbon, and has maintained permanent contact with the performing arts and dance dramaturgy. In 2015, the Cinémathèque française presented a retrospective of his work. Mouramateus is a partner of the production company Praia à Noite. António Um Dois Três (2017) was his feature film debut. In 2020, IFFR has a Deep Focus Short Profile on his work and A chuva acalanta a dor will have its world premiere in the Ammodo Tiger Short Competition.