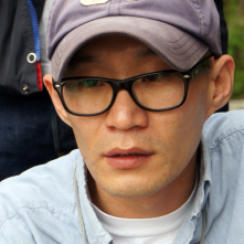 LEE Kwangkuk (1975, South Korea) studied film at the Seoul Institute of the Arts. He made several short films and worked as an assistant director for Hong Sangsoo. Lee’s feature debut Romance Joe (2011) won him the Citizen Reviewer’s Award in Busan, the Best New Director Award at the Buil Film Awards, and the Best Screenplay Award at the Busan Film Critics’ Awards. In 2014 he made his second feature A Matter of Interpretation, which premiered in Busan and was selected for numerous festivals. His third feature A Tiger in Winter (2017) also premiered in Busan.