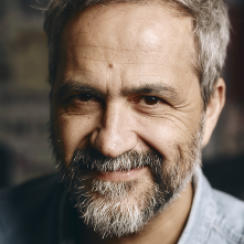 João NUNO PINTO (1969, Mozambique) moved to Portugal at the age of five, shortly after the former colony's independence. He started working in advertising as an art director, and his career as a filmmaker took off when he graduated as a director from the New York Film Academy. Having directed several television commercials, he debuted with his first feature, América (2010), an ironic look at contemporary Portugal through the eyes of illegal immigrants. It is considered one of the most successful Portuguese films of all time and has won awards at several film festivals worldwide. The story for Mosquito (2020) was inspired by Nuno Pinto's grandfather, who fought for the Portuguese in World War I.