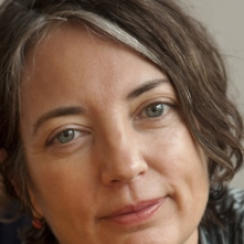 Ineke SMITS (1960, Netherlands) graduated as a photographer and video artist from the Rotterdam Art Academy in 1984. Afterwards, she obtained a master's degree in film directing and script writing from the National Film and Television School in England. She collaborated with Dutch writer Arthur Japin on a few short fiction films; their first feature fiction, Magonia (2001), was awarded Best Film at Bogotá Film Festival and was in competition at IFFR, San Sebastian, Toronto, Karlovy Vary and many other festivals worldwide. Smits received part of her training as a filmmaker in Poland and she lived and worked for many years in Georgia. She is heavily influenced by Eastern European Cinema and by the emphasis on the image that artists from Eastern Europe put in their work. Her second feature, De vliegenierster van Kazbek/The Aviatrix of Kazbek, was the closing film at IFFR in 2010 and it received a nomination for the European Film Awards.