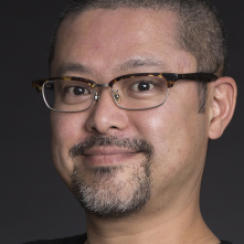 HIRABAYASHI Isamu (1972, Japan) studied graphic design and advertising at Musashino Art University. After making a career as a graphic designer and art director with Light Publicity, a top advertising design agency in Japan, he started working as an independent film director in 2001. He has made several short films, among which BABIN, selected for Locarno International Film Festival 2008, and aramaki (2009,) selected for the Berlinale. Shell and Joint (2019) is his first feature.