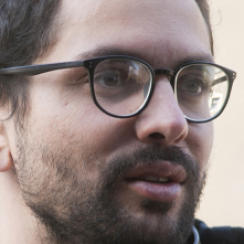 The short films of Govinda VAN MAELE (1983, Luxembourg) have been enthusiastically received and awarded at multiple film festivals. His Josh (2007) was the first Luxembourg short to be shown on the network Canal+ and also his A Day in the Open (2012) was broadcasted on, this time, international television. Van Maele then focused on directing documentaries and curating at the cinema museum Cinémathèque. Gutland (2017) is his feature film debut.