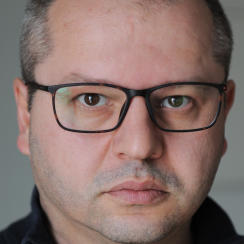 While studying film directing, Corneliu PORUMBOIU (1975, Romania) had already made several short films. His A Trip to the City (2003) won a Cinéfondation Award in Cannes. After a period as artist-in-residence at Cinéfondation, he made his first feature 12:08 East of Bucharest (2006). The film won a number of awards, including the Caméra d'Or. His second feature, Police, Adjective (2009), won several prizes, among which the Jury Prize in Cannes and the FIPRESCI Prize. His later films include When Evening Falls On Bucharest Or Metabolism (2013, selected for Locarno), The Treasure (2015, selected for Cannes Un Certain Regard), the documentary Infinite Football (2018) and The Whistlers (2019), selected for the Cannes Competition.