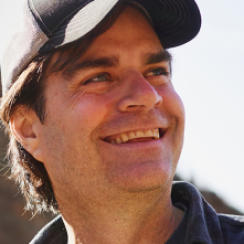 Braden KING (1971, USA) is a filmmaker, visual artist and music video director. He graduated from the School of Cinematic Arts at the University of California. In 1998, he co-directed the documentary Dutch Harbor: Where the Sea Breaks Its Back with Laura Moya. He directed the documentary Homeland: The Story of the Lark (2010) about Laurie Anderson. Here (2011), his first feature film, was nominated for the Sutherland Trophy by the British Film Institute and the Grand Jury Prize at Sundance. He also created the installation Here [The Story Sleeps], which premiered at MoMA. He contributed to the 2014 documentary The Film That Buys the Cinema. The Evening Hour (2020) was also nominated for Sundance's Grand Jury Prize.