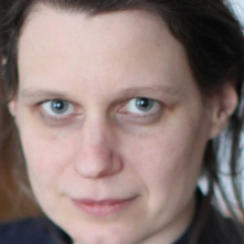 Bettina NÜRNBERG (1976, Germany) was educated in Art and Film in Hamburg, Berlin and Toulouse. Her films have been screened worldwide and she exhibits her other work throughout Germany. Nürnberg co-directs most of her films with Dirk Peuker, such as the short documentaries Zement (2014), Franzosensand (2016) and Elephant Bearing an Obelisk (2018). Both Nürnberg and Peuker also work in the fields of photography and sculpture.