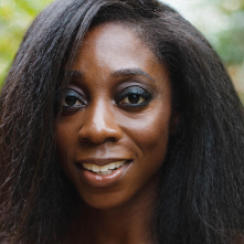 Akosua Adoma OWUSU (1984, USA) is a Ghanaian-American avant-garde filmmaker and producer whose films have screened worldwide at prestigious film festivals, museums, galleries and universities since 2005. She studied film, media and art at the California Institute of the Arts and the University of Virginia. Named by Indiewire as one of the six Avant-Garde Female Filmmakers Who Redefined Cinema, she was a featured artist at the 56th Robert Flaherty Seminar programmed by renowned film critic Dennis Lim. She divides her time between Ghana and New York, where she works as an Assistant Professor at the Pratt Institute in Brooklyn.