How are Europe’s public and private funders looking to a more inclusive future? As the industry evolves to better reflect a diverse society and a diverse community of storytellers, how can we affect change within a complex infrastructure that will ultimately prove fundamental, lasting and sustainable? How can we tackle the challenges that are still preventing under-represented voices from being fully included in the conversations? Moderated by Victoria Thomas (Polkadot Factory), with Miranda Wayland (Head of Creative Diversity at the BBC), director Shamira Raphaëla, Executive Director of Eurimages Roberto Olla and media and entertainment banker Elisa Alvares.

After introductions (during which Shamira explained how she likes to make films on topics “where the good guys can be bad, and the bad guys can be good”) Eurimages’ Roberto Olla spoke about his institution’s hitherto lacklustre approach to inclusivity and diversity – “nothing has been done so far,” he conceded – and how he and his colleagues intend to address this in 2021.

First he noted how Eurimages, which has 40 members and consequently 40 ministers to consult, in 2012 dealt with the issue of gender equality after taking on board the sage advice and counsel of Swedish Film Institute’s Anna Serner.

He pointed out that the “time was ready to look at diversity as well” and has put in place a “timeline” to effect change, he added. This consists of hiring external consultants who will deliver a report on the subject to the Eurimages board of management in June. After digesting the report’s findings, Olla and his colleagues intend to devise a policy to be agreed (hopefully) in November before roll-out in January 2022.

“I am in the middle of a learning curve right now and I have to admit am very confused, but I hope I can see the light at the end of the tunnel soon,” he said, adding. “We are right now in the middle of the desert, but with a firm conviction that we need to do something, and having the 40 countries deciding this is already a great result.”

Elisa’s remit on inclusivity and diversity is, she said, very different as she doesn't have to convince 40 ministers, and is therefore able to move “in a more dynamic way.” Over the past five years she has noticed “a push towards more awareness around issues,” which more or less began around Me Too.

Institutional investors look closely at ESG, Environment Social and Governance (inclusivity falls into the Social category) when considering their investments, she pointed out. What’s more, she has observed positive peer pressure whereby various funds “align” themselves to tackle the dysfunctional practices that they encounter across industries.

Investors have more and more leverage over companies, she said, “yet I do see that there is a movement towards creating minimum parameters around projects [as well], and that is to do with gender, with race and ethnicity, with sexuality, with the intention to really facilitate and create change for the good.”

“However, we do have a primary force here which is the economic demand for profit generation, that is the primary drive. But what I see is that, more and more, the concern for ESG [and that includes the environment as well and good governance around companies] is becoming more and more relevant.” 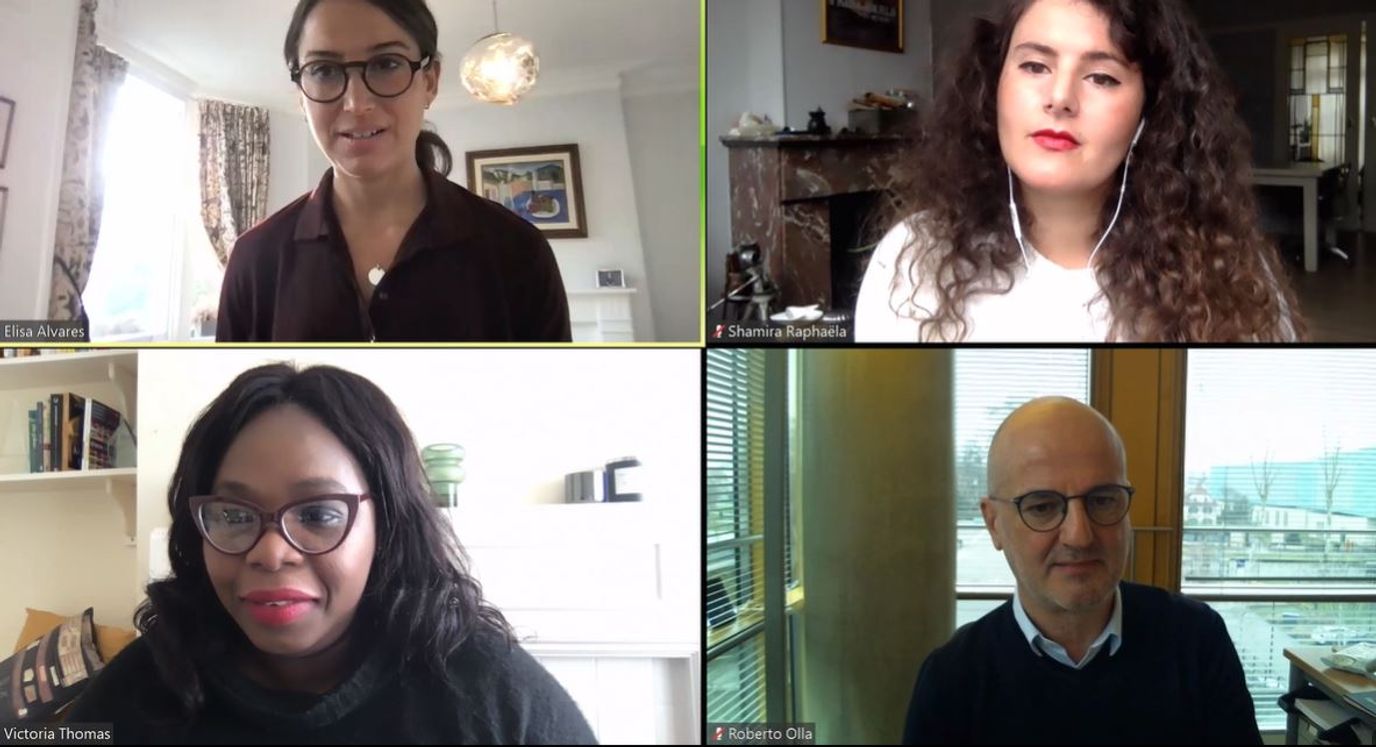 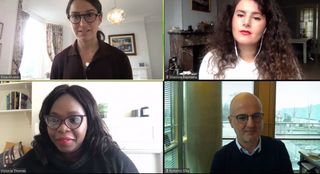 Director Shamira said how it is very tiring to be continually “educating” on these issues rather than get down to the business of creating. She commented how she is dismantling a system with a white dominant gaze “that has existed since the beginning”, and that it is not a quick fix to “sprinkle people of colour over here and over there and everything will be alright.” It’s about changing the way we look at films, she said, and what we consider to be quality, what is an important story, what is relevant, how we should tell this story. “All those things are connected to the way that we view the perspective of the industry and I think we have to change that whole perspective instead of adding some boxes that we can tick.”

Moderator Victoria underlined the role of ‘signpost’ institutions such as labs and particularly festivals. Should they be held more to account in terms of addressing the issue of inclusivity/diversity?

Roberto spoke of the “elephant in the room,” that of white hegemony within the industry, both in terms of what is screened at festivals, how the topic is addressed as well as the business conversations that take place with the markets or forums. “Yes I believe that festivals and markets, especially those that are publicly funded have a responsibility and should be dealing with this,” he said, although he appreciated the lead that the likes of IFFR take in events such as Reality Check.

Elisa spoke of her own “elephant in the room,” ie the resistance that she encounters in the marketplace among buyers for whom inclusive/diverse content “does not fit a certain mould.”

“This is where I see the role of festivals,” she said. “Because they can open doors and when those distributors realise that, actually, there is an audience, that would be a very important channel towards opening the marketplace.”

Shamira articulated her frustration at lack of imagination on the part of the industry as to what the potential audience can be. “I think we should re-define and maybe even re-educate the industry on who our audiences are, because it is a crazy idea to think that the audience isn’t only consisting of white male middle/upper class people, there is a whole world out there of people of different ethnicities, different classes. Why are they not the audience? I think this is also a mind-switch that financers should do.”

Miranda Wayland joined the debate late after a technical hitch. She is head of Diversity and Inclusion at the BBC, looking at building and integrating diversity across all of the BBC output.

She said that over the years she has seen much growth and improvement in the area of diversity/inclusivity and was “fortunate” in her partnership with the Creative Diversity Network that brings together all the major broadcasters to maintain improvement on screen.

Miranda said she has seen “sharp spikes in progress” in terms of the presentation of ethnicity and race on-screen. But off-screen continues to be the biggest challenge, and specifically around disability. She also highlighted other areas that continually need to be addressed. “When we talk about a broad spectrum of diversity we often fall on key aspects, so when we talk about ethnicity the conversation tends to be about the black agenda, often mitigating around East Asia and Southeast Asian representation. When we look [at] disability…often visible disabilities are an indicator of success, which means that hidden disabilities become much more challenging to evidence,” she said.

“We need to start expanding that conversation so you are not just isolating the diverse richness of an individual through one particular lens and we have a long way to go in terms of making that really authentic, but I’m really proud of some of the stuff that we have done. We have had some innovative content that really speaks to local communities, and accelerating that is our next step,” she added.

Shamira addressed the issue of demographic groups, such as the older white male, who may feel threatened by the changes which are afoot. She said therefore that a “push and pull attitude” is necessary, ie to push forward, but to bring everyone along in the process.

“This is not saying there is no stage for you anymore, this is about wanting to broaden the stage, and I think that is something [about which] maybe people feel fearful,” she pointed out. “They feel like ‘now, I don’t matter anymore,’ and I think, even though it is a bit tiring to keep doing that, we should keep emphasis on that fact that this is an inclusive industry which means inclusive for everybody, also for the CIS hetero male, because I am still interested in his stories. I am just also in interested in other stories.”

BBC’s Miranda got to the nub of ensuring behind-the-scenes adherence to inclusivity/diversity. “The biggest power that we have as broadcasters is to stop commissioning with people who don't deliver what we want,” she said. “If we’re providing you with the support, the resources, the access, the tools…then we have to be bold and strong enough to go ‘right, until you sort yourself out, we are going to stop commissioning with you’. That is the biggest power that we have…”

Victoria underlined how being diverse can be a profitability thing, that there are lots of emerging economies and new monied audiences around the world prepared to spend their hard earned cash on content – as long as they feel represented within it. Did financier Elisa see such a link between diversity and profit?

Definitely yes, she answered (but she is cautious by nature because as a financier she deals in risks). “I am optimistic and I think that private money is, to a certain extent, able to drive a change. As I said at the beginning – offscreen, definitely. And I have been seeing more and more of that. Direct investment into companies where requirements include [questions like], ‘how balanced are you in terms of your team?’; ‘how many senior people do you have that represent minorities or genders?” Obviously these are all young initiatives, [so] it may take a little bit of time before we see definite results.”

Business is business, she added, and ultimately the best leaders look to benefit their audience stakeholders, as opposed to investors and shareholders, and this is what will create longevity in a business, she observed.

“The signs are there and the challenges are there as well, because it is not simple to be a leader and say ‘I’m bringing change.’ It takes time and it takes support from everywhere.”

Other blog posts on Reality Check

"We wanted to find a mutually beneficial place and bring people together to ask 'what is your experience, what are you struggling with?’”

IFFR’s Esther Schmidt is a communication consultant and writer working in the Dutch film scene.

Given the unusual circumstances of 2020, IFFR thought it was an opportunity to use the brand of its annual deep-dive conference Reality Check to host a series of private roundtable discussions about pressing issues for the film industry and the world of film festivals.

IFFR Pro symposium to ask: where are film festivals heading?