How can the industry better support a storyteller from the inception of an idea through to reaching an audience whether they are working in shorts or feature films, a VR/XR project, web series, multimedia installation or anything in between? How can the whole ecosystem – including festivals, markets, funders, distributors and exhibitors – better foster a plurality of voices and support fresh storytelling across all formats, without confining them to preconceived notions and existing structures? Moderated by co-curator of IFFR Reality Check Wendy Mitchell with writer, director and producer of immersive works, Gayatri Paramerswaran (Nowhere Media), Kay Meseberg (Head of Mission Innovation at ARTE), Marie Logie (Auguste Orts) and Caspar Sonnen (Head of New Media at IDFA).

Opening the discussion, IDFA’s Caspar Sonnen described how DocLab was launched in 2007, “very much in response to the internet, as it was starting to hit the mainstream at around that time.” Tech was in its infancy along with social media. YouTube was barely two years old and the iPhone was yet to be embraced by global consumers. But there were filmmakers and storytellers exploring new media, so Sonnen and his colleagues set out to determine firstly how the digital revolution could influence filmmaking and the filmmaking industry, and secondly how it was influencing documentary art.

The IDFA focus was then (and still remains) documentary, so Caspar determined that the burgeoning DocLab would focus on documentary across all disciplines, including non-linear storytelling and non-traditional media. “Just like documentary is defined by what it’s not – it’s not fiction – we decided to avoid having to say what DocLab is about by saying it’s about non-traditional forms of storytelling.” It therefore became open to anything from online performance art to interactive games and installations, and then VR and immersive media.

DocLab may have been designed to facilitate artistic expression across new platforms, but did the audience embrace it? “It showed that audiences at festivals are adventurous and hungry for things they haven’t seen before – that’s the biggest asset we as festivals have,” Caspar responded. That’s why festivals for new media have been such an important platform and why regular exhibition outlets have always struggled, he added. It’s very hard to exhibit a website or a technically challenging installation in regular theatres.

Marie Loge produces and distributes work for Brussels-based platform Auguste Orts, set up by artists Herman Asselberghs, Sven Augustijnen, Manon de Boer, and Anouk De Clercq. She explained how their productions are as much at home at film festivals as in museums, art centres or on VOD platforms, but that frequent hat-changing is necessary, as well as a shift in vocabulary for dealing with personnel from particular artistic contexts or disciplines.

She got to the nub of her argument quickly, stressing how a project’s form follows the initial idea, as vague as that idea may be. Nothing is proscriptive. The project evolves through the discussion process, she said.

In terms of distribution, a sense of the collective is invoked as the contact bases and networks of the company’s personal and guest producers are pooled for best results. “The artists are engaged in the production of their own works but also the distribution,” she confirmed. “We put these networks of each individual artist together to be able to bring a broader network to each of these titles that we are producing. It's a very fertile ground. We’ve been doing it for 15 years and it's still a pleasure to work in this way.”

She pointed out however that as open as festival audiences are to the company’s work, institutional funding is difficult to secure. Every time a new fund head takes over, she said, the process of persuasion has to restart. And while production support may be given, the funders seem to have little understanding of eventual platforms or release outlets.

Gayatri Paramerswaran (Nowhere Media) agreed with Marie, stressing that form is secondary to the story. “I think the story needs to take the front seat – it’s good to be, as a storyteller or as an artist, agnostic of the medium, and let the story define the way you are going to tell it.”

An advocate for “real change” in her work, she described her fluid approach to interactive with the example of Kusunda, a VR about a “sleeping language” in Nepal. Wanting to tell a story in VR but at the same time wanting to achieve impact are not always compatible desires, she argued, as VR audiences can be, what she termed, “exclusive.” Which is why she decided that a more effective advocacy tool for indigenous groups who are co-creating the project would be a 2D ‘flattie’.

Gayatri pointed out the difficulties of the funding ‘puzzle’ as she tries to raise finance from non-profits, film and cultural funds, partnerships with universities and foundations (such as the Sundance Institute), as well as co-productions (“to produce works that can grow in scope”) and in-kind support.

She adds of her “exhausting” negotiations with funders: “Every conversation you have as a funder is educational on both sides…We normally have conversations with funding executives who, a lot of times, are very transparent about the restrictions that they are working in… I think the people on the front line, the executives, actually know a lot of what is going on, what the needs are, and having conversations with us creators and artists actually helps them make the case to whoever is above them to say ‘hey this is not working.’”

ARTE’s Kay Meseberg explained part of his role: to “elaborate” on new ways for the company to distribute and to “experiment with a purpose” in breaking new ground, as well as to “look into the future.”

“The whole audiovisual landscape changed immensely over the past 5 years,” he commented. “I believe that it will also continue to change… The last twelve months also showed us that there is a real urgent need for a certain kind of change. To adapt our processes to produce traditional content to the new pandemic situation was quite a challenge but we did it, and we see that the audience is trusting public broadcasters like ARTE a lot. So we have a really interesting year behind us and I think also an interesting time in front of us.”

Kay remembered how, early on, ARTE started streaming content in 2006. “We know where this is today, and we were lucky that we started early so that people really watch a lot of our programmes online.”

He spoke of the many innovative productions ARTE has and continues to produce. “It is a good playing field, I think, to learn about the time in front of us.” He cited Fort McMoney (web documentary and strategy video game) as an outstanding success, and also other game productions “which showed a different kind of gaming than the attention-driven gaming we have today dominating the market.”

“Also in VR, and using it for experiencing content in a different way,” he added. “And maybe now we will see the first co-productions that ARTE are involved in…There are lots of different things but I think for us it’s important to learn what does that mean for the shifting landscape of media, and what can we pick up there to adapt to changes?” 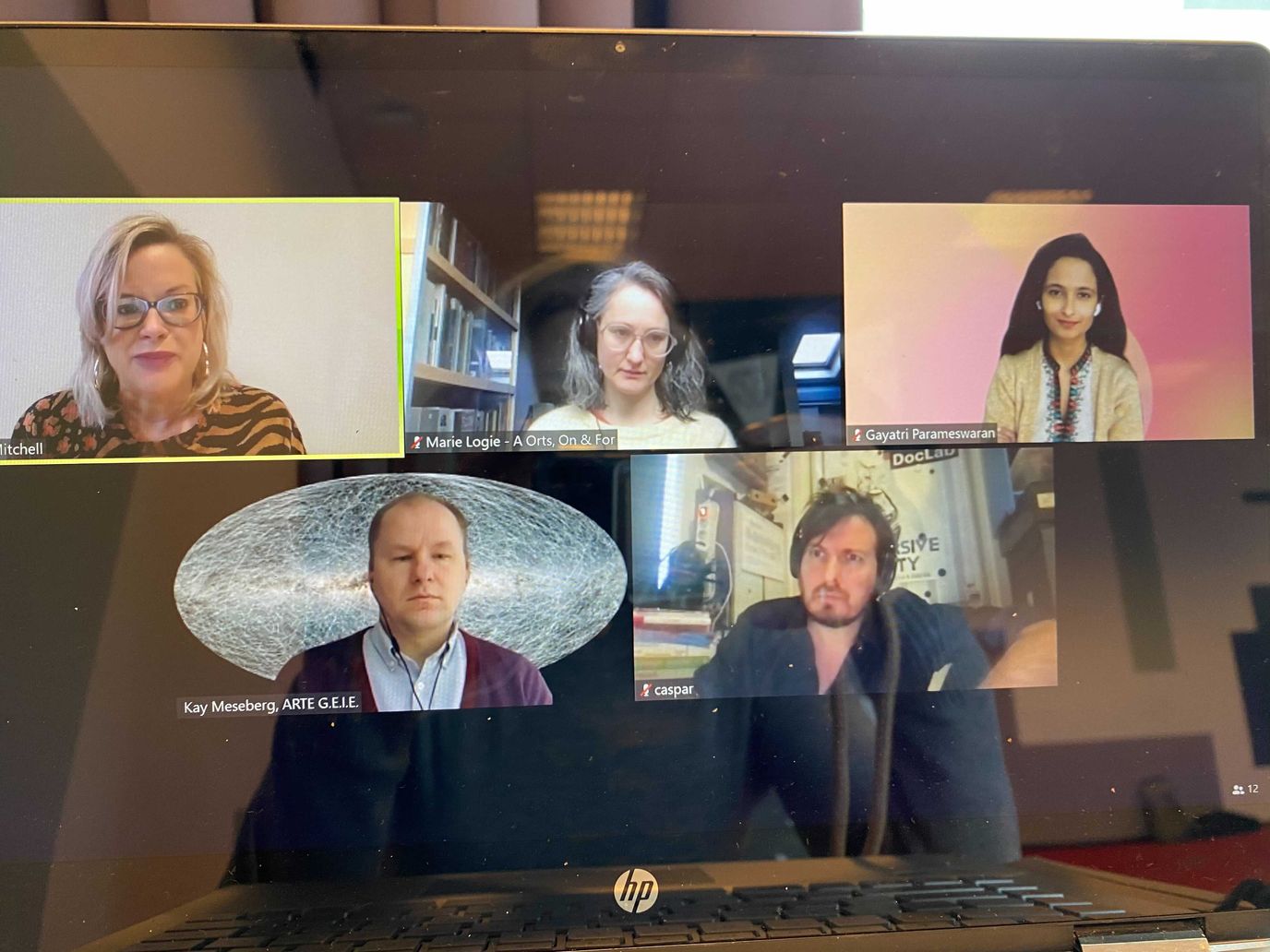 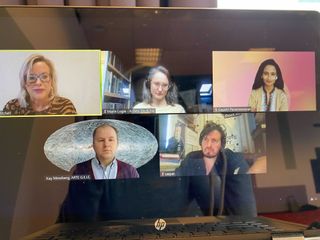 When the conversation turned to how festivals can improve the situation for makers, IDFA’s Caspar further pointed out the advantage of his festival not being a year-round institution but one that has the luxury of being able to go into hibernation, to think and regroup, and bring back everybody again for the next edition. He stresses how this meant he and his team could be flexible in organising their highly curated event.

Caspar also underlined that the established lines of demarcation that exist in film production (producer/director/DOP/editor etc) are not so rigid within his sphere of interest. Quite often, teams are very small and multi-tasking. Festivals and institutions in general would do well to adapt their systems and process to that, he argued.

Gayatri spoke of her festival experience, not necessarily even with a project but as “incredible spaces for exchange and collaboration.”

“I go to a DocLab just with an open mind to get inspired…and to see into the future in some ways.” She further described the “mind-blowing” DocLab Conference where she can learn from other people’s practices in determining “how to get ahead in the immersive world.”

She pointed out her dissatisfaction however at the excess costs that she is forced to bear at some events, (“can’t we find a model that is fairer?” she implored) which is why she is a fan of the ticketed Electric Dreams festival which has a profit share system.

Marie agrees with Gayatri, and further pointed out how a festival’s dedication to immersive or ‘artist moving image’ content, starts with a specific affinity on the part of the programming or audience outreach departments. That said, there have been times in the past at larger festivals when the reception has been somewhat impersonal, and where she wasn’t even introduced to the person who programmed her film. She has come to prefer smaller festivals, therefore, where there is a more direct and personal link to industry and festival personnel.

ARTE’s Kay Meseberg articulated the role of festivals in his work, as well as for ARTE in general. For traditional content, he underlined, they are a really important part of the whole ecosystem of funding, pitching and co-production. “Also it is a way to expose ourselves with some of the productions we are involved in, and this is the touching ground for more experiential or interactive productions, which are obviously not the same volume of traditional ones, but maybe a good way to show where things are moving.”

He also expressed his admiration for the way festivals reacted during the pandemic, citing the “heart-warming” example of CPH:DOX back in March 2020. “We saw in these past months how important they are for community building and for soul-searching.”

Other blog posts on Reality Check

"We wanted to find a mutually beneficial place and bring people together to ask 'what is your experience, what are you struggling with?’”

IFFR’s Esther Schmidt is a communication consultant and writer working in the Dutch film scene.

IFFR Pro symposium to ask: where are film festivals heading?