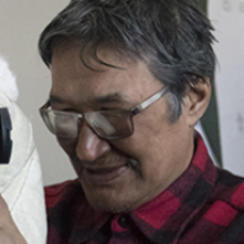 Zacharias KUNUK (1957, Kapuivik near Igloolik) is a sculptor and filmmaker. In 1981, Kunuk sold three sculptures in Montreal and brought home to Igloolik the Arctic's first video camera. He is president and co-founder of Igloolik Isuma Productions, Canada's first Inuit-owned independent production company, for which he has made several short films and documentaries. He won the Camera d'Or at Cannes in 2001 for his first feature film, Atanarjuat, The Fast Runner. Since then, Kunuk has directed more than 30 documentaries and feature films. Last year, Kunuk, Cohn and the Isuma Collective were chosen to represent Canada at the 58th Biennale di Venezia with One Day in the Life of Noah Piugattuk as its main video installation.