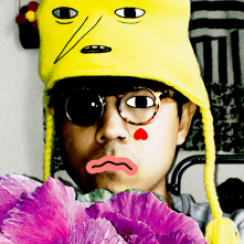 WONG Ping (1984, Hong Kong) started out in the underground scene in Hong Kong and then went on to study media design in Australia. He began his career at a local TV station in Hong Kong, and he started writing short stories which he published on his blog. Soon after, those stories turned into video animations. He has been releasing videos on YouTube since 2010, and in 2014 he founded Wong Ping Animation Lab. His works have been exhibited internationally in film festivals, museums, solo shows and group exhibitions.