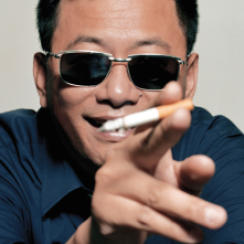 WONG Kar-wai (1958, Shanghai) emigrated to Hong Kong at the age of five. He graduated in Graphic Design in 1980, attended a course at Hong Kong Television and climbed up from production assistant to scriptwriter. Ever since his feature début As Tears Go By, Wong is considered one of the most important contemporary film makers. Many of his films were screened at the festival.