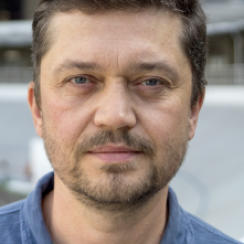 Valentyn VASYANOVYCH (1971, Ukraine) studied Cinematography and Documentary Filmmaking at the Karpenko-Kary National University of Theatre, Film and TV in Kiev. In 2007, he graduated from the Andrzej Wajda Master School of Film Directing in Poland. He released his first feature film, Business As Usual, in 2012. His 2017 feature, Black Level, won the FIPRESCI Prize for Best Ukrainian Feature at the Odessa International Film Festival. Atlantis (2019) won Best Film in the Horizons section of the Venice Film Festival.