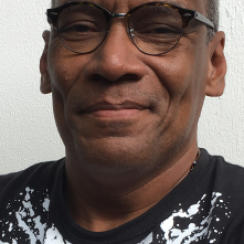 Tirzo MARTHA (1965, Curaçao) grew up in the Buena Vista neighborhood in Willemstad, and though he came from a comfortable home, he was frequently confronted with the reality of the decaying social conditions around him. In art, he saw the space and possibilities for strengthening his voice, and to go into all the details that comprise the big puzzle of how people exist. He started his art education at the Academi di Arte Korsou at Curaçao in 1985, before moving to the Netherlands to study at the Hogeschool voor de Kunsten in Utrecht. After following up on his education at the private Frans Molenaar Fashion School, he returned to Curaçao in 1991, where he became a socially engaged artist present both in his studio and on the street. He is a co-founder of the Instituto Buena Bista – Curacao Center for Contemporary Art. His latest installation is Testament of Hope and Failure (2017), exhibited at the IFFR.