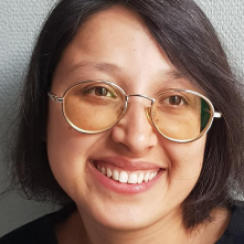 Shahrbanoo SADAT (1990, Iran) is an Afghan writer and director based in Kabul. Her first short fiction, Vice Versa One, was selected for the Directors' Fortnight at Cannes Film Festival in 2011. She made Not At Home (2013), a hybrid project that was developed and produced within a year at DOX: LAB, an initiative of the Copenhagen International Documentary Film Festival. In 2013, she started her own production company, Wolf Pictures, in Kabul. She developed her first feature film, Wolf and Sheep (2016), within the Cannes Cinéfondation Residency in 2011; Sadat was 21 years old at the time, the youngest ever selected for the residence. The film won the main award at Directors' Fortnight 2016. Her second feature film, The Orphanage (2019), followed Wolf and Sheep as the second part of a planned pentalogy, five films based on an unpublished autobiography. It was presented at Directors' Fortnight in 2019.