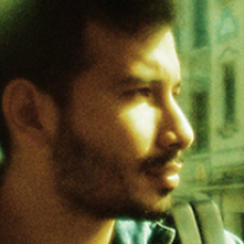 Salomón PÉREZ (1989, Spain) holds a bachelor's degree in Communication Science. PÉREZ has been working as a post-producer in TV and advertising since 2012. In 2015 he decided to pursue a career in filmmaking and began his studies in Film Direction at the University of Art and Design Lausanne (ECAL). En medio del laberinto is his debut feature.

En medio del laberinto/In the Middle of the Labyrinth (2019)