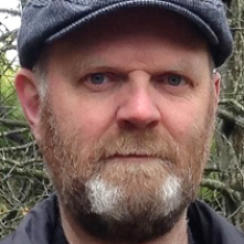 Richard TUOHY (1969, Australia) is a maker of short films who also studied philosophy, music and botany. In the late 1980s and early 1990s, he was an active member of the Melbourne Super-8 Film Group. These days he also works with 16mm celluloid. Tuohy is fascinated with abstractions from nature and the materialist film tradition. He encourages other artists to work with film through his Artist Film Workshop initiative. He is also co-founder of the Australian International Experimental Film Festival.