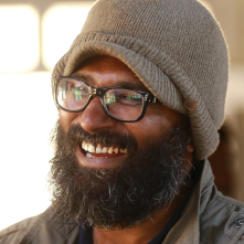 RAM is an Indian filmmaker and actor, who has been working in Tamil cinema since 2007. He studied Tamil literature at the Madras Christian College and also started writing short stories himself. His debut film Tamil M.A. was released in 2007, followed by Gold Fish in 2013, for which he won several awards. In 2017, he made Taramani. His latest film Resurrection premiered during IFFR 2018.