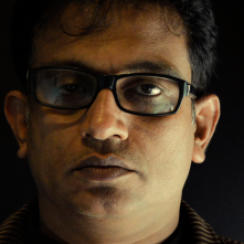 Prasanna JAYAKODY (1968) was born in an artistic family that was strongly rooted in traditional Sinhala values, and he grew up in a Buddhist environment. This became a major inspiration for his productions. When he was 21 he made his debut with the stage drama Shadows and Men, which was a critical success. He then started directing television dramas that were loved by the masses and won him numerous television awards. His earlier films Sankara (2006) and Karma (2010) have also been shown at IFFR.