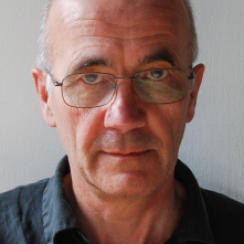 Patrick KEILLER (1950, UK) is an architect who began to work as an artist in the late 1970s. His first audio-visual installations were exhibited at the Tate Gallery in 1982. His early short films were independently produced and exhibited the juxtaposition of architectural imagery and voice-over fiction which has characterised his work until now. Robinson in Space won a Tiger Award in Rotterdam in 1997.