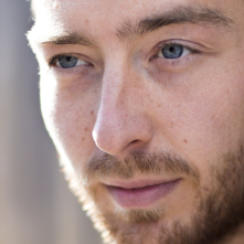 In 2012, Morgan KNIBBE (1989, Netherlands) graduated from the Netherlands Film Academy with his short experimental film A Twist in the Fabric of Space. This critical film on overcommunication received immediate recognition from the Dutch film industry. In 2014, he made Shipwreck and Those Who Feel the Fire Burning. Both focus on the European refugee crisis in the Mediterranean area. Shipwreck won the Silver Leopard in Locarno.