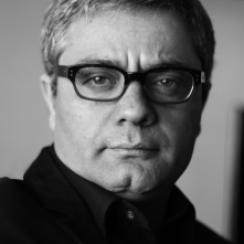 Mohammad RASOULOF (1973, Iran) is an independent filmmaker. He studied sociology at Shiraz University, and film editing at Sooreh Higher Education Institute in Tehran. He made six short films in the period 1991-1999. His first feature, The Twilight, was released in 2002. On December 20, 2010, he was sentenced by the Iranian government to six years in prison on charges of "assembly, collusion, and propagandizing against the regime". The sentence was later reduced to a conditional sentence of one year and a ban on making films. Since then Rasoulof makes his film clandestinely, starting with Manuscripts Don't Burn (2013). After winning the Un Certain Regard competition in Cannes with A Man of Integrity (2017), he was arrested again. His passport was confiscated, preventing him from travelling outside of Iran. Rasoulof was again sentenced "in July, 2019 by Iran special prosecutor’s office for offenses relating to media and culture to a one-year in prison and a two-year ban on practising his profession. This meant he was unable to attend the Berlinale for the premiere of There Is No Evil or to accept the Golden Bear" (Screen Daily).