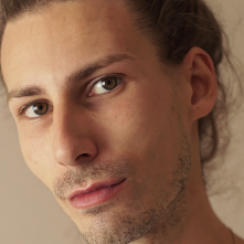 Mikko KESKIIVARI (1987, Finland) is an artist and filmmaker who graduated from the Netherlands Film Academy in Amsterdam in 2016. In his work he explores ideas of scale, distance and perception. He is also interested in cinematic, physical and virtual spaces and within that the role of the audience. Keskiivari's short film Dolly the Duck was screened at the 60Seconds Festival 2016 in Copenhagen, where he was nominated for both the Jury and Audience Award.