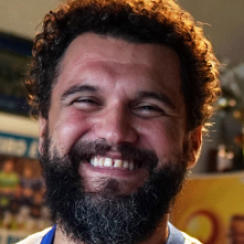 Maurílio MARTINS (1978, Brazil) is a filmmaker, screenwriter and sound technician. He is also the co-founder of production company Filmes de Plástico. His first short film Contagem/The Inside (2010), which he made with Gabriel Martins Alves, received awards at several festivals around the world. The co-directorship from Maurílio and Gabriel Martins, No coração do mundo/Heart of the World has its world premiere at IFFR 2019.