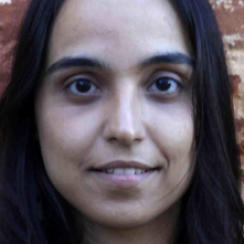 Marina MELIANDE (1980, Brazil) attended the film and video course at the Universidade Federal Fluminense, after which she worked as an editor. She was artist in residence for two years with Le Fresnoy in France, where she worked with video installation. With Felipe Bragança, she made two short films and the films trilogy Hearts on Fire. The Joy (2010), world premiere at Director’s Fortnight in Cannes, is the second part of the trilogy and the omnibus film Neverquiet (Film of Wonders) (2010) is the conclusion. Meliande's debut solo film Sultry (2018), world premiere at IFFR, has been supported by Cinefondation’s Residence and the Hubert Bals Fund.

Watch The Joy on IFFR Unleashed