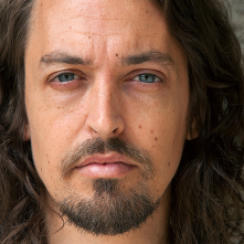 Johannes NYHOLM (1974, Sweden) is a director, producer, screenwriter and animator. He was educated in film, art, new media and animation, and manages his own production company. Nyholm first gained recognition for his animated film series, The Tale of Little Puppetboy (2008), which has been shown internationally at festivals and galleries. His short film, Las Palmas (2011), gained worldwide fame with its trailer alone. He debuted as a feature filmmaker with The Giant in 2016 (IFFR Live 2017), which had the highest review index of all Swedish films released that year. Koko-di Koko-da (2018) will have its international premiere at IFFR. With a background in classic animation, Nyholm often mixes different styles and cinematic universes.